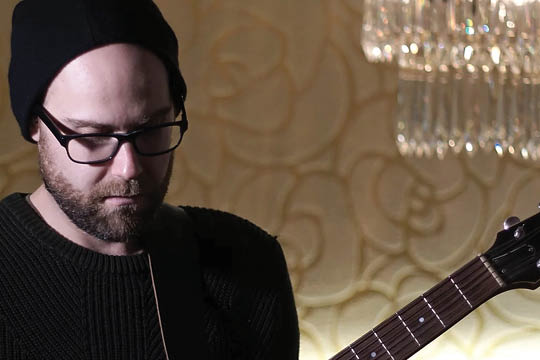 Marc Rivest sang his way into Vancouver on a moving train back in 2015. Since then he has gone on to study under some of the top musicians in British Columbia, play increasingly large venues and events, and build a 3 hour solo show consisting of jazz standards, Celtic folk favourites, modern pop reinterpretations, and originals. Using a loop pedal and harmonizer to fill out his sound, Marc aims to present a unique high energy show that will get feet tapping and audiences dancing.

Born and raised in the greater Toronto area, Marc’s musical journey began with piano lessons as a child. Switching to the guitar at the age of 13, Marc never put it down. After completing a Bachelor of Arts in Music from the University of Guelph in 2011, Marc’s career as a performer began with busking outside grocery stores and the local LCBO. After relocating to Calgary in 2013, Marc was able to make busking a well-paying full-time job. With daily performances through Calgary Transit’s Musicians in Motion program, Marc successfully funded an independent solo album called “Breathe,” which was released in 2014. The album is available for streaming at www.marcrivest.bandcamp.com.

After the release of “Breathe,” Marc decided to advance his musical training through a Diploma in Jazz Studies at Capilano University. While at Cap U, Marc studied jazz guitar and voice with instructors including Bill Coon, Ron Samworth, Andre Lachance, Geordie Roberts, and Steve Maddock and performed in the Capital Jazz vocal ensemble under the direction of Rejean Marois. He graduated with distinction in May 2018.

Marc performs frequently in the Vancouver area. Highlights have included the Vancouver Christmas Market, the Railway Club, the grand opening of the Shipyards in North Vancouver, a feature on Downtown Vancouver’s “Downtown Sounds” playlist, and various events with the Arts Councils of Vancouver, North Vancouver, and New Westminster. He is currently in preproduction for a series of studio recordings, which are scheduled for a release in Fall 2020.