CULTURE DAYS WITH KUNG JAADEE AT THE MARKET

CULTURE DAYS WITH KUNG JAADEE AT THE MARKET 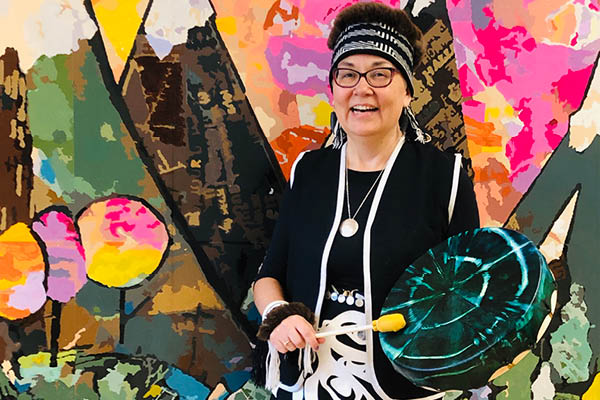 Kung Jaadee – Kung Jaadee will perform the Haida legend Raven’s Feast, which has also been published into a book, along with a song and some drumming.

Kung Jaadee (Roberta Kennedy) is a professional storyteller, educator and published author belonging to the X̱aayda (Haida),  xʷməθkʷəy̓əm (Musqueam) and Sḵwx̱wú7mesh (Squamish) First Nations. While she was born and raised in Haida Gwaii, she now resides with her family in North Vancouver on X̱wemelch’stn territory (Homulchesan), also known as the Capilano Reserve. Her Haida name, Kung Jaadee, means ‘Moon Woman’ and was presented to her at her great uncle’s memorial feast by her cousin Crystal Robinson. Over the past 27 years, Kung Jaadee has performed traditional Haida legends teaching morals about sharing, helping others and loving herself, while also sharing vivid personal stories about her clan’s survival of the smallpox epidemic, the history of her people and the racism she has endured over time. She has performed at hundreds of festivals, schools, universities, museums, Aboriginal celebrations and conferences across Canada. While living in Haida Gwaii, she taught X̱aad Kil, the Haida language while working with the Old Masset Village Council, at Chief Matthews School and the Haida Health Centre in Gaw Tlagee. Kung Jaadee holds a Bachelor of Arts with a major in English and minor in Women’s Studies from the University of Victoria and a Bachelor of Education from the University of Alberta. She is a published author of the popular children’s books, Raven’s Feast and Gifts from Raven (selected as one of the Local BC Books to Read), as well as K-2 curriculum book called Haida Nation: Indigenous Communities in Canada. In the spring of 2020, Rubicon will be publishing her new educational textbook for primary grades, “We Are Home.” Her stories have also been published in several anthologies, magazines and online publications.

As per Provincial Health Guidelines we are taking numerous precautions to keep both the performers and the public safe. We have multiple hand sanitizing stations and public washrooms available inside Market. There will always be signage indicating a limited capacity on the deck as well as arrows indicating entrances and exits to keep traffic one directional.

Please note that this programming is weather dependent. Be sure to check our social media and website for any updates!