Posted at 11:40h in Community Involvement by LQM Marketing
Share 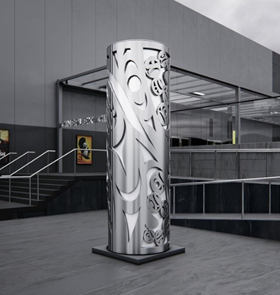 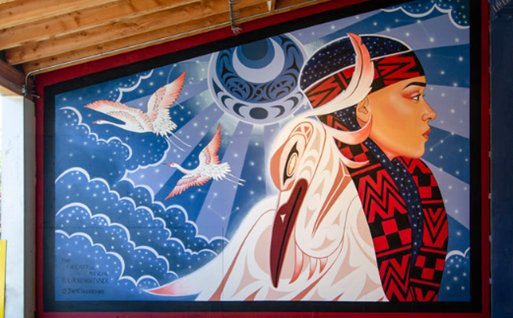 James (Nexw’Kalus-Xwalacktun) Harry was born October 31, 1989 in Vancouver, British Columbia.  He is of Squamish Nation (Swxwú7meshḵ) and European decent (Scottish, and German). James spent much of his childhood and early adolescence immersed in art. He learned First Nations stories, form and design, and carving skills from his father, Xwalacktun (Rick Harry), a master carver of the Squamish Nation.   Similarly, Jennifer Kleinsteuber, James’s mother and an accomplished painter, gave him hands-on experience with drawing and painting. He developed his own techniques and methodology, expanding on his father’s work and beginning to formulate a contemporary approach to Aboriginal art and practice. When he was in secondary school, James began his career as an artist by carving the doors of the BC Aboriginal Sports Hall of Fame.  He attended Emily Carr University of Arts and Design, obtaining a Bachelor of Fine Arts Degree with a major in Visual Arts in 2014. His studies focused on integrating traditional Coast Salish art forms with contemporary concepts and materials.

As an ECUAD student, James received scholarships and bursaries in recognition for his rigorous art practice and academic success.  The YVR Art Foundation honoured him with the Career Artist Scholarship in 2011.  This allowed him the opportunity to create “From Sea to Sky”, a 6’ high aluminum totem pole that emitted LED lights through Coast Salish iconography cut by water jet. In the same year, James completed a coop internship with various artists in the United Kingdom where he learned metal casting. As part of this experience, he taught Aboriginal sculpture, painting and drawing and shared stories and culture in various Scottish communities.

In 2013, James was chosen as student representative to travel with faculty members to the Sakahan Exhibition at the National Gallery of Canada.  He has become a spokesperson for indigenous peoples nationally and internationally.  He has been invited to Scotland and Germany and to the parliament buildings in Ottawa to represent Aboriginal people of Canada and to address issues related to reconciliation. The Royal Botanical Gardens of Edinburgh brought James to the Commonwealth Games of 2014 to demonstrate the integration of his individual style with traditional Coast Salish art practices. James was also commissioned to create the gold, silver and bronze International Games medals in 2014.

For the last decade, James has worked in different school districts, the City of Vancouver and non-profit agencies to produce community based art projects reflecting Canadian heritage, culture, and ideologies. A large portion of that time has been spent engaging youth and students with creating permanent art and sharing teachings about Coast Salish art and knowledge.   This community work provides him with a network of both Aboriginal and non-Aboriginal connections. He has a unique capacity for developing thematically significant work that connects all people to the ecology of place while building greater understanding between cultures. The whole process brings people together, changes ideas, and leaves a legacy to remind the community that transformations occurred.

At the same time, James has been investing in his art business, developing an individualized focus on ways of integrating the traditional with the contemporary. His current focus is threefold: using metal, light and traditional formline to create totems and other contemporary works, carving yellow and red cedar in traditional and abstract works, often larger than life, and working collaboratively with Lauren Brevner to create innovative carving/painting works that reflect First Nations stories while making a statement about the search for identity and wholeness.

If you would like to learn more about his work, please visit: https://www.jamesharry.ca/